Don’t worry if you weren’t able to make the 2015 American Society for Cell Biology (ASCB) meeting – Epigenie’s got your back.  We grabbed the most comfortable shoes we could find, subjected ourselves to all the standing and walking and salty conference snacks so you wouldn’t have to, and scoured the meeting for the cuttingest-edgiest synthetic biology we could find.  Here’s what we saw:

Yes, we’re leading with CRISPR.  So did the syn bio session.  Two of the key players in CRISPR technology are Jennifer Doudna and Feng Zheng; Jennifer Doudna was on hand to give her account of CRISPR’s origin story.  She first came across CRISPR when she was asked for some help by Jillian Banfield, who was perplexed this weird feature in bacterial genomes…

A lot of genomes had mysterious Clusters, which were Regularly Interspersed with viral DNA, were often Palindromic, and Repeated tens to hundreds of times.  They seemed like they must be important, but they weren’t protein-coding.  As an RNA expert, Jennifer thought they must be functioning at the RNA level.

As the field developed, of course, it emerged that CRISPRs indeed produce RNAs that guide Cas proteins to target viral DNA, providing acquired and inherited immunity for bacteria.  Jennifer’s lab soon realized they could hack this system to cut any DNA sequence by providing a crRNA targeting it.  Once they could cut specific sequences, they could use the technique for highly specific genome editing, spawning the rapidly exploding field we see now.

The lab’s more recent research has visualized searching dynamics of the main CRISPR protein, Cas9, within eukaryotic nuclei.  In some pretty cool movies, she showed that targeting Cas9 to specific DNA sequences can show you where exactly that bit of genome is in space, in real time.  They’ve also worked on more efficient Cas9 delivery, showing that a pre-assembled Cas9-gRNA complex works fast, disappears quickly after its work is done (thus reducing off-target effects), and works well with a co-transfected DNA repair template for homology-directed repair.

Giving New Life to Materials for Energy, the Environment and Medicine

Angela Belcher gave another cool talk, focusing on what we’ll call meta-nano-bio-viral-material engineering.  That sounds pretty complex, but the main idea makes a lot of sense.  Life has evolved to make some pretty amazing materials, from super strong abalone seashells to the microscopic diatoms that essentially invented glass.  The biology templates crystallization of inorganic materials in very precise, nanoscale patterns.  Apart from their amazing products, the great thing about abalones and diatoms is that they work at friendly temperatures and pressures and don’t make toxic waste.  If we could harness this process, maybe we could use it to make nano-structured materials useful to us. 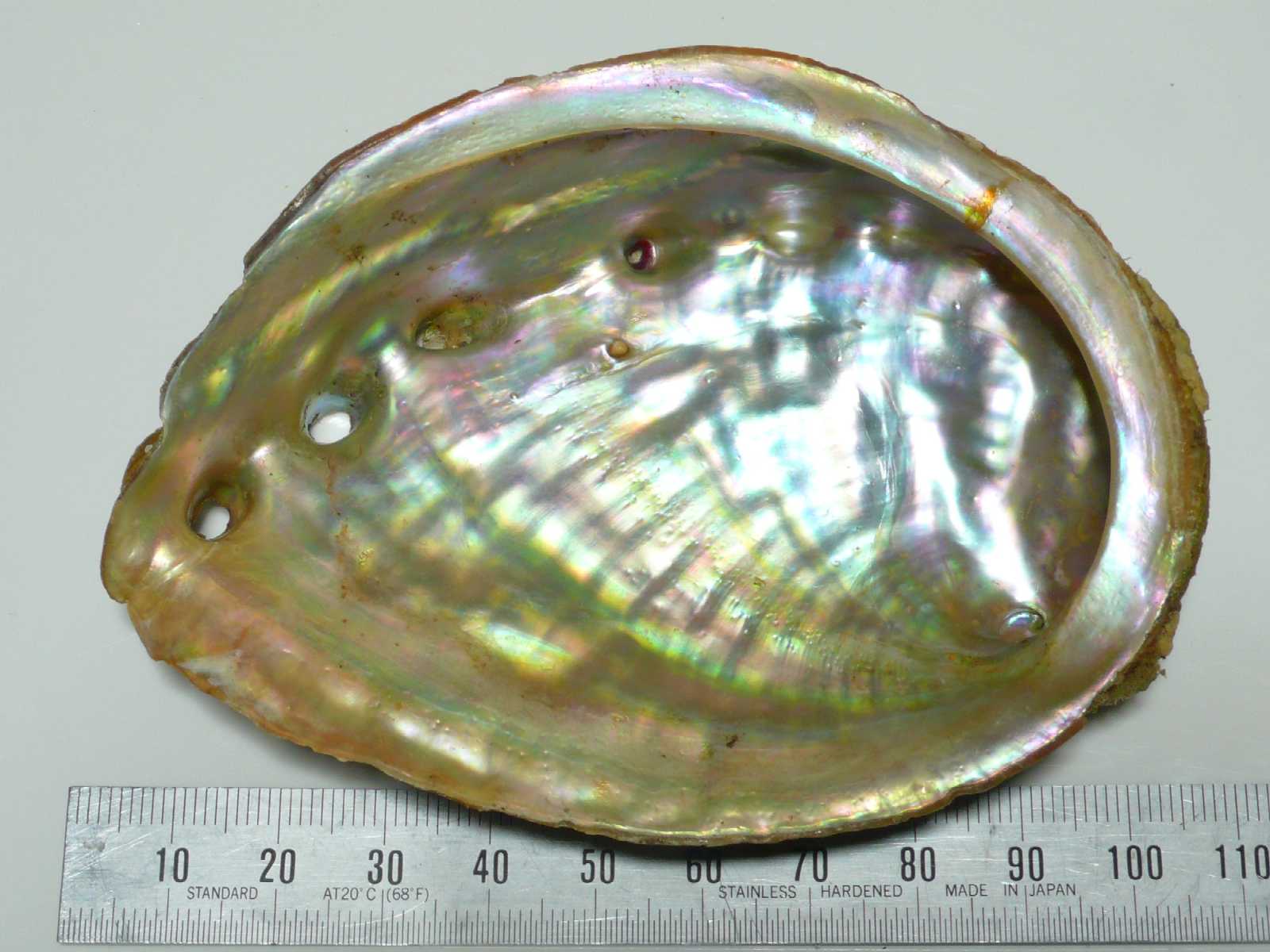 What if life could grow us better batteries, instead of just super-strong seashells? By N yotarou (N yotarou) [GFDL, CC-BY-SA-3.0 or CC BY 2.5], via Wikimedia Commons

Unfortunately, however, biology hasn’t evolved to do much with the semiconductors and metals we use in our own technology.  Angela’s lab gets around this by evolving peptide sequences to bind gold or platinum or various other small molecules, using phage display.  By expressing these peptides in bacteriophage coat proteins, they can template things like platinum-coated gold nano-wires, gold/cobalt oxide electrodes for higher-capacity batteries, carbon nanotube electron guides for more efficient solar cells, and better nano-catalysts for biofuel production.

Coming full circle back to biology, they even made tumor-targeting phage.  These provide enough imaging contrast to reveal tiny tumors, otherwise too small to see, which helps surgeons find and remove them.

Most synthetic-inclined biologists have a soft spot for Turing patterns lurking somewhere in their souls.  Proposed by the same Alan Turing of Nazi code-breaking and artificial intelligence fame, Turing patterns have long been a white unicorn for mathematical biologists trying to explain biological patterns like spots and stripes.  The main idea is that you can get, for example, light stripes if light cells have both a close-range positive feedback loop and a long-range negative feedback loop.  The local positive feedback helps one light cell surround itself with a whole cluster of other light cells, while the longer-range negative feedback loop makes sure the light cluster is surrounded by dark cells.

This theory works great in computer simulations, but it’s really hard to prove in real biology.  Shigeru Kondo, however, showed a really elegant demonstration of Turing-like patterns in zebrafish.  Traditionally, the short versus long ranges of the positive and negative feedbacks were thought to be caused by different diffusion speeds.  Instead, Shigeru showed that zebrafish achieve the length scale difference by using short and long protrusions from pigment cells.  Light-colored cells have short dendrites that must be either really cold or really pointy, because they make dark cells run away wherever they touch them.  This leaves behind light stripes.  However, the light cells also have longer protrusions that actually help dark cells survive, via the delta-notch pathway, which surrounds the light strips with dark ones, ergo stripes.

We hear Turing patterns can be slimming. By Azul (Own work) [Copyrighted free use], via Wikimedia Commons

This talk was pretty cool because it finally vindicated a long-predicted model for pattern formation, just with one key difference.  Instead of fast and slow diffusing chemicals, the patterns were formed by physical touch, using short and long fingers with opposite effects.

Andriy Didovyk showed off the power of CRISPR for synthetic gene networks by constructing a library of orthogonal, promoter elements with custom-designed, flight-tested CRISPR targets.  The promoter elements can be individually controlled by different gRNAs, and they can even be mixed and matched with other regulatory elements.  This solves a longstanding limitation on synthetic biology – there were really only a few “switches” people could use to build circuits with, which until now has kept gene circuits from having more than a few moving parts.

Another long-standing challenge is eukaryotic chemotaxis; i.e., how do white blood cells hunt down bacteria?  Shiva Razavi described work with Takanari Inoue to tackle this from the bottom up, by making synthetic vesicles that can chemotax to rapamycin.

They started out by making this work in real cells, with two peptides that dimerize when exposed to rapamycin.  One was anchored to the membrane, and the other was fused to an activator of Rac, which induces cell polarization.  Rapamycin makes the two peptides dimerize, which pulls the Rac activator onto the cell cortex, making living cells actually crawl towards regions with higher rapamycin!  They have rapamycin-induced membrane localization working in synthetic vesicles, and they’re working their way down the biochemical line to actually make synthetic, chemotaxing vesicles.

Generation of in vitro Aged Skin

After suffering under the San Diego sun, we were glad to see that Paula Pennacchi, working with Silvya Stuchi Maria-Engler, has found a good synthetic model for skin aging – the key is glycation of epidermal collagen I.

Chuenchanok Khodthong with Mirus Bio evaluated different methods of delivering CRISPR/Cas9 for gene editing in mammalian cells.  The upshot was that no one method is necessarily best; transfecting plasmid DNA encoding cas9 plus a custom sgRNA is easiest, transfecting cas9 mRNA plus a sgRNA can be a bit more effective, and transfecting a pre-assembled Cas9 protein-sgRNA complex (a ribo-nucleo protein, or RNP) can be better for uncooperative cells.

James Goldmeyer checked the efficacy of using single-stranded (ssDNA) oligos as templates for homology-directed repair (HDR) after CRISPR targeting.  In U-2 OS cells, oligos worked well at 2.5-10 nM.  Homology arms from 20-70 bp all worked about the same (15%-ish correct HDR), but 10 bp homology arms were too short.

Using Tardigrades to Investigate Mechanisms and Applications of Desiccation Tolerance

And to finish it off with something completely different, Thomas Boothby identified genes in tardigrades (tiny, indestructible, eight-legged gummy bears that can survive in the vacuum of space) that are responsible for helping them tolerate dryness so well.  Transferring those genes into yeast or bacteria made the cells 10-100x more resistant to desiccation!  This could help make more stable vaccines or drought-tolerant crops.

Tardigrades: about how we felt by the end of the conference, except a bit less desiccation-tolerant. By Bob Goldstein and Vicky Madden, UNC Chapel Hill [CC BY-SA 3.0]

highlights from past conferences

Next-Gen epigenomics to understand why we age

From Functional Genomics to Systems Biology

Principles of Chromosome Structure and Function

Epigenomics in Development and Disease

Epigenetics at Discovery on Target 2016